What Is The Origin Of The Term Birdie?

You’re probably wondering what the term ‘birdie’ has to do with golf. Before we get down to this, we have to explain what a ‘par’ is.

If a player sinks a ball in one shot under the par rating for that hole, they score a ‘birdie’. So, to use the ‘par-3’ example again, if they score a birdie on a hole such as this they will sink the ball in two shots instead of 3.

The History Of The Term ‘Birdie’

In the 19th century, ‘bird’ was American slang and mean ‘great’ and this is why it was associated with the one-under-par score. A golf course in Atlantic City, New Jersey, claimed that the term ‘birdie’ originated here in 1903.

An ‘eagle’ refers to a two-under-par score and it is a term which originated among American golfers. The eagle is the national symbol of the United States and as the two-under-par score is a great score, this magnificent bird was readily associated with it. The eagle made its way to British golfers by way of a Mr HD Gaunt who came across eagles in Canada.

An ‘albatross’ refers to a three-under-par score. It is called such because it is a very rare score just as an albatross is a very rare bird. Since the 1930s, less than 50 men and women have been lucky enough to score albatrosses in golfing championships around the world. 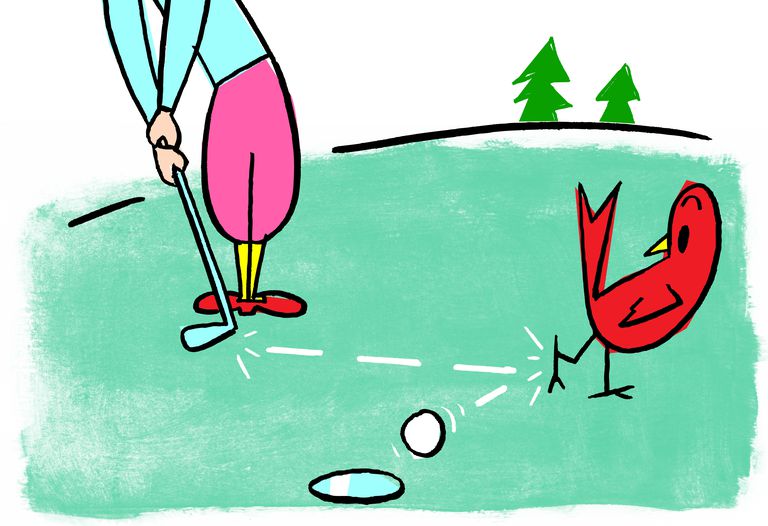 There are other terms, which are related to golf, that have no bird associations. For example, the term ‘bogey’ is used to refer to a score of one over par. For example, if you’re playing a 7-par hole – and you sink the ball in eight shots – you’ll score a bogey. Two- or three-over-par are referred to as a ‘double-bogey’ or ‘triple-bogey’. A ‘condor’ is the term for a four-under-par score. This score is only possible to achieve on a par-5 or a par-6 hole.

Although the variety of golfing terminology may seem off-putting because there is so much of it, don’t use this as an excuse not to try the game out. It’s not strenuous like games such as rugby and soccer, but you still get a good workout while walking the course. Also, making the perfect shot also requires a great amount of concentration, so if honing your mind skills is something that you enjoy doing then golf is for you!