The Top Golf Courses in Asia

The Top Golf Courses in Asia

While we like to think of the United States and Europe as having some of the best courses that the golfing world has to offer, many would be surprised to find that Asia offers just as many high-quality courses set in some of the most breath taking locations in the world. These are courses that are often attached to magnificent estates and resorts, and are worth checking out at least once for those golfers that are seeking a little adventure.

All of these courses are located in some of Asia’s most beautiful countries, and are often set against backdrops of rolling mountains or pristine beaches.

Designed by golfing legend Ernie Els, this course has earned numerous awards over the years, which includes The World’s Best New Golf Course in 2014, as well as Asia’s Best Golf Course in 2015. The 18 hole, 72 Par course is set on the coast of one of the country’s virgin rainforests, offering crystal clear water of the Andaman Sea to one side, and thick, lush jungle on the other.

Originally developed by Jae Bong Chung, a South Korean tycoon, this 400-billion-won resort located In Namhae comes with its own golf course that consists of 18 holes with a spectacular view of the surrounding ocean. Some of the most notable spots on the course are the Par 3 holes that were designed by golf architect Kyle Phillips. Along with the course itself is a boutique hotel that comes with 130 villas, as well as a spa facility – making it a great way to kick back and enjoy some relaxation and some mobile betting sites.

Part of the seaside resort of Hua Hin in Thailand, this award-winning course provides golfers with both a memorable experience and some of the best views known to man. The course has been host to three Asian Tour championships since it was first built in 2007, and has won a number of rewards. The resort also boasts a number of eateries, pool villas, and a famous water park. 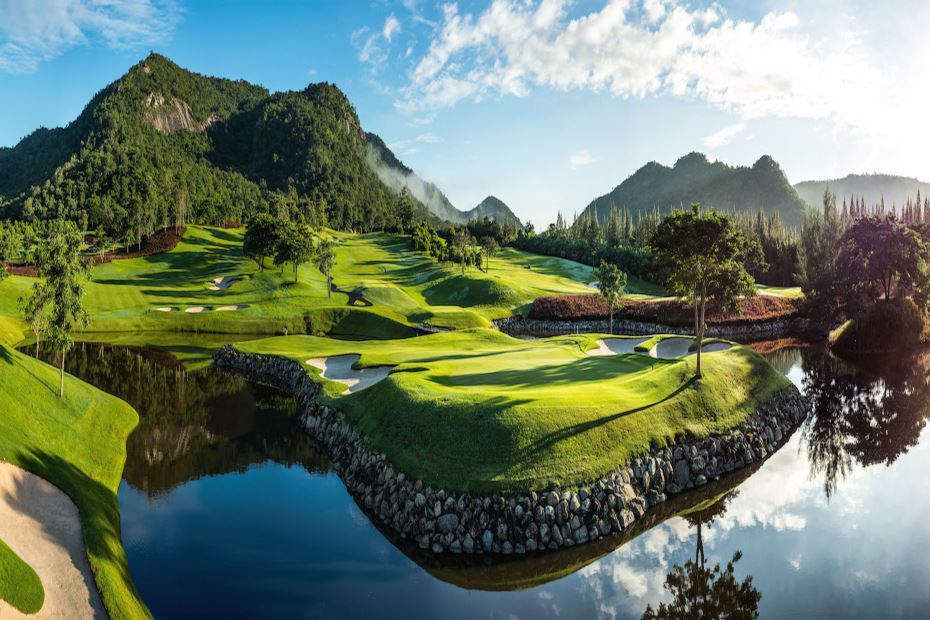 Often considered the best golfing sport in the world, this courses, designed by Greg Norman, has been an extremely popular spot for golfers from around the globe. With five holes that face the Indian Ocean, and another eight that are part of Bali’s rice paddies, the change in scenery for each hole is what makes the course so enjoyable. The most notable of which is the 7th hole of Par 3, which overlooks the Tanah Lot temple. The course itself is part of the Pan Pacific Nirwana Bali Resort.

As one of the biggest courses in the world, Mission Hills has become extremely popular in recent years. Covering 20 km squared, Mission Hills is a beautiful extension to Shenzhen City, and offers 12 18-hole courses that were designed by Vijay Singh, Nick Faldo, and Jack Nicklaus.